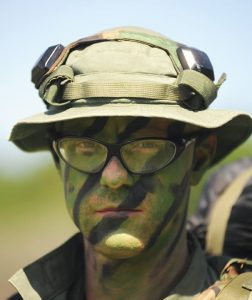 The genesis of my interest in study of warfare comes from my maternal grandfather.  He was captured in WWII at the Battle of The Bulge.  He never talked about it which somehow made it more intriguing.  He showed me a belt and a bayonet for an M1 Garand he had when I was a kid.  I didn’t grow up in a gun home.  I’ve never been hunting, but I became interested in the weapons of war from a mechanism standpoint.

My father was an engineer in the aerospace industry which likely explains my B.S. in Mechanical Engineering.  I started working in aerospace in college and I stuck with the same company for 10 years before I switched industry.

I’ve always liked war games, so as a teenager I was drawn to more authentic first person shooter video games.  I’ve always enjoyed a game play model that grounded in reality.  I played paintball in my high school years as another outlet for war gaming.

I had an uncle introduce me to firearms in high-school.  Through him, I acquired two M1 Carbines which tied nicely with my interest in WWII weapons.  I knew then that once I turned 21 I would buy a Glock 19 to carry.  I soon acquired more though I’m a big proponent of the idea, “beware the man with only one gun; he probably knows how to use it.”  This gave me enough to start competing in IDPA pistol competitions and 3 gun competitions at CMMG.  Through one of these competitions I was introduced to One Shepherd.  They had a promo table set up with their newly acquired MILES 2000 system.  I had scored right in the middle of the pack that day, but they broke the scoring groups into and A class and a B class.  I was average overall but high enough up in the B class to get to walk a prize table.  Everyone before me skipped the free pass One Shepherd was offering which was good for and 8 hour game they were hosting.  I jumped on that and never looked back.

Through this free pass, I was introduced to Christopher Larsen (now Dr. Larsen) and One Shepherd.  I found out about their Warrior Leader Course, and signed up for their next available Warrior Basic Course; the entry into their program.  I came for the real steel force on force gun-play, but I stayed once I realized what they were really reaching through the tactics to teach leadership.  Their instruction and accessibility was completely amazing.  I completed their three year course a little early and earned my Warrior-Leader Tab.  This signifies classroom and fieldwork totaling six weeks and was modeled after the Army’s LDAC (Leader Development and Assessment Course).  It covers everything from the basic warrior skills (shoot, move, communicate) to leadership and decision making skills (OPORD development, leadership methodology, etc).  I was invited to become part of the staff and completed their Battle Staff Seminars in a year and was on my way to earning their Black Hat instructor certification which entails a classroom portion and a year long instructor apprentice position.

Shortly before getting my Black Hat, I was offered the position of Director of Training.  This position had been filled by Dr. Larsen since One Shepherd’s inception in May of ’81.  It was an immense honor to be entrusted with a school that taught what it did, from a guy who literally wrote the book on small unit tactics and leadership.  I took the reigns for a  while until I had to step down to the S6 staff role because our first child was on the way.  After this adjustment and some change among the staff, I stepped over to the position of Deputy Director of Training where I remain.  I’ve since completed the requirements to obtain my Lightfighter scroll, which signifies mastery in the area of dismounted light infantry patrolling.  All in all I’ve been involved as a volunteer with One Shepherd since 2009.  I’ve been able to bring the principals I learned at One Shepherd to my day job.  We now use OPORD’s and the principals of Troop Leading Procedures every day in our department.

I maintain to this day, that the proudest moments in my life have been through One Shepherd.  To be included among the caliber of people One Shepherd has; who represent involvement in every major US conflict conflict since Grenada, is one of my highest honors.  Among these members is an individual who was literally the first boots on the ground at the Gulf War and an a person who put his boot on the King of Spades after  his capture during the second invasion of Iraq.  One member of the Peace Corps who went through our coursework said it best, “One Shepherd casts long shadows.”

In my free time I still enjoy military themed gaming, especially if it also ties in and aviation aspect.  My wife is also went through One Shepherd’s program earning her Warrior-Leader Tab.  She has also completed the Battle Staff seminar and has served as the S5 and now currently serves as the S1.  I have three children who will one day go through the program themselves.  The impact One Shepherd has had on my life and those around me will leave a legacy for generations.