Ever had meaningful small unit tactics training with Nerf guns?  I have.

Being highly involved in putting together the small unit training that One Shepherd provides and a war gamer, I’ve seen confusion and struggle when putting together something under either of these banners.  Gamers often say they want realism in their war games when they usually mean authenticity, and vice-versa with trainers.  Gamer’s ogle over realism when it’s not actually provided, and trainers strive too much for realism when then just need authenticity.  Add in a factor of peoples desire for entertainment and it gets even more complicated.

Let me explain.  First, we have to settle on terminology.  We’ll define simulation and training, and then authenticity and realism.

In this context when I use the term simulation, it can basically be defined as a war game.  According to Merriam-Webster, a war game is a simulated battle or campaign to test military concepts and usually conducted in conferences by officers acting as the opposing staffs : a two-sided umpired training maneuver with actual elements of the armed forces participating.  This understanding automatically puts the focus on the testing and verification of military concepts.  In other words, it’s just not built to being intentionally entertaining.  It’s not really training either.

In the entertainment industry, there are more than a few games (board, video, or otherwise) that claim to do war gaming.  Only a hand full actually do.  I don’t begrudge them for that, because who wants to simulate walking land nav for three hours before hitting your objective of watching an empty valley all night – all while sitting at a computer screen.  At the same time I say that, I can’t ignore game platforms like ARMA (which is the commercial version of Virtual Battle Space or VBS used by the US and forces around the world).  It’s on its third iteration and has a worldwide following of over three million players.  When employed under the banner of war gaming, ARMA/VBS becomes a valuable tool for anything from small unit tactics or as part of the Military Decision Making Process and everything in between.  Here the Premack Principal applies though – very few people engage in a game marketed as entertaining for the specific purposes of training.  They will endure training but only as long as that brings them a more entertaining experience.

Training on the other hand is defined as the act, process, or method of one that trains.  People train to lift weights, type faster, and win at monopoly.  It’s important to note that the objective of training is not necessarily reflected in the training itself.  Training in push ups is useful for wrestling but it doesn’t show up in a match ever.  What is important here is context provided by a good instructor.  Training to shoot shapes and colors on a target as fast as possible on the instructors command doesn’t at all translate to a gunfight whatsoever.  When re-framed in context of an exercise used to get the brain thinking about something other than the mechanics of shooting, that training becomes more tolerable.

The second set of terms that are often confused are authenticity and realism.  These mean two very different things when it comes to training or war gaming.  Authenticity is defined as conforming to an original so as to reproduce essential features.  Realism, on the other hand, is concerned for fact or reality.

In both training and war gaming, the goal of training or war gaming must be clarified.  This will help go a long way to align participants expectations.  If you were a reenacting group, you would certainly align yourself with realism, usually down to the stitch.  Authenticity has a different approach.  Realism says, “That rucksack is the wrong color and doesn’t have the correct buckles!”  Authenticity says, “He has a rucksack.”

This works both ways.  Authenticity can take things too far as well.  “My air-soft rifle holds ammunition”  Sure it’s authentic in that it holds ammunition, but realism says, “A single magazine holes 300+ BB’s therefore you won’t need to reload during this CQB scenario and that isn’t realistic.”  This is also true.

The best recent example of this was watching a master instructor teach mobile defense to a few squads.  Rather than placing their practical exercise in the field with weapons and blanks, he chose to use Nerf guns on the FoB (Forward Operating Base).  This constructive exercise was authentic with respect to the terminal learning objective.  Due to the short range of the engagements along with a few other stipulated rules, the students were able to grasp all of the working parts of a mobile defense because they could see it.  Without that condensed range, the students would have been left in small groups in the field without any situational awareness as to what other units were doing.  They would have also wasted a lot of time with some groups not even engaging.  They would only learn later through storied conversation as to what happened.  By having an exercise that authentically positioned the students in a mobile defense within the confines of the game and associated rules, they were able to reach an real understanding of the lesson very quickly.

The relative assignment of training, simulation, authenticity, realism can be rather subjective.  With that in mind, we’ll use the following graphic to summarize these points with a specific outcomes or objectives in mind. 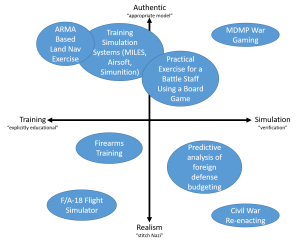 Civil War Re-enacting, when taken completely seriously, is very realistic.  It’s also very much a simulation in that they are testing (or in this case re-testing) specific military concepts.  MDMP war gaming on the other had doesn’t necessarily care to have a completely realistic realm by which to test a concept.  It might be entirely software based or quite often hashed out through dialogue among the battle staff in a room somewhere.  ARMA based land nav is  fun considering you can do it in an air conditioned room while eating a pizza.  More fun than actually walking for hours on end through rough terrain.  It’s authentic in that it can drive home the major points of land nav.  It’s not very realistic in the sense that your pace count is always perfect regardless of slope or fatigue and you don’t have to worry about magnetic declination or interference.  An F/A-18 Flight simulator is a 1:1 replica of all the working functions of its real counterpart and is therefore appropriate for most training oriented towards the operation of the aircraft controls and functions.  It would not be appropriate for G-force training or how to fly inverted as these platforms are often motionless.

Whatever camp you are in, make sure you define your objectives clearly for all parties involved.  This goes for instructors and participants.  Training objectives should be clearly defined as an instructor and should be communicated somehow to the students.  This can be done directly, or culturally through community expectations like the example found in kids sports teams that don’t keep score.  Participants should also clarify their expectations and desires.  Are you there to experience a realistic simulation or would you be better off framing your experience as  authentic training for what you are wanting to accomplish?  Be honest with yourself, but don’t be surprised when authentic training means you put down your rifle and pick up Nerf guns every once in a while.

PreviousPrevious post: Tactical Security Operations: The Screen
NextNext post:Doing It All Over Again

One thought on “Training vs Simulation : Authenticity vs Realism”