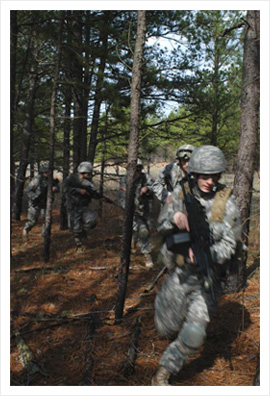 I’m riding across Missouri with four members of One Shepherd’s staff, headed to a 3-day immersive field exercise. Invariably the war stories start flying – as that is the birth right of all troops. And this is good because war stories often turn into lofty discussions of what went wrong and how to fix it.

One instructor expresses dismay for a local SWAT team that had failed a tactical exercise a couple years back. To hear this instructor tell the story, the SWAT officers were tactically adept in live fire drills and weapon manipulation. Their marksmanship was impressive and they gave every impression of being disciplined professionals. However, everything seemed to fall apart when the SWAT team asked a couple of well-established paintballers to act as OPFOR for their force-on-force (FoF) exercise.

The FoF exercise was set in an old manufacturing plant with a maze of rooms and hallways. It was a big task to begin with, but with 42 officers it was do-able. Besides, the exercise scenario called for just two “gunmen” on a rampage. The One Shepherd instructor was, of course, one of the two paintball gamers invited to act as the crazed gunmen in the scenario. And he admitted that most of the SWAT officers were new to paintball markers, with just a few being experienced paintballers.

What happened next was a complete route. SWAT entered the building in good form and began to clear rooms using proper doctrine and tactics. Very uniformed, very disciplined. Yet as the OPFOR gunmen began to attack, just two gunmen eliminated multiple teams of SWAT. The controllers stopped the scenario and everyone, including the OPFOR thought it was just a fluke. On the spot corrections were given and the scenario proceeded – horribly.

The second scenario proved even worse than the first. The controllers refused to stop the scenario insisting that the SWAT officers would need to learn to adapt and overcome their opponent’s tactics. The end result was that more than 30 SWAT members were eliminated before the two paintballers simply ran away, untouched by paint.

A third iteration of the SWAT scenario finally ended with the paintballers being casualties, but again only after conducting multiple suicide charges that initially ended in complete, unabated success for the two-man suicide team! Again, it produced similarly lopsided casualties against the SWAT team before the two paintballers were shot.

Fast-forward a couple of years and one of the paintballers is now an instructor for One Shepherd. The experience unnerved him then, and it dominates our discussion because he is now concerned that his students might fall into that same trap – strict adherence to tactical doctrine. Furthermore, he admits he is still confused as to what went wrong for the SWAT team.

So what did go wrong?

Perhaps nothing. First and foremost I’ll insist that training should create a safe place to fail. Training scenarios are not to be used as competition or punishment. Failure is desirable. It produces the best learning if proper, solution-focused reflection is employed. In fact, as long as the students are attempting to find solutions to the problem, failure should be encouraged.

Now clearly at a tactical level something was drastically wrong. Forty-some-odd SWAT officers should be able to subdue and/or eliminate two mad gunmen. I don’t care how drugged-up, armored-up, or talented the gunmen are!

I’d suggest the issue of weapon manipulation is paramount here. It’s no small concern. This battle was up close and personal, conducted at a few mere meters between opponents. Fumbling with an unfamiliar weapon system leaves your opponent precious few moments to gain the upper hand. If you’re accustomed to one weapon platform and are handed another for which you’ve never been trained…well, expect disastrous things.

The fix is easy enough to identify. Train on the weapon systems you will use. If you employ live fire with firearms, train on that exhaustively. If you then employ a simulation system (paintball marker in this case) for FoF training, be sure to train on that weapon system until everyone is flawlessly proficient! 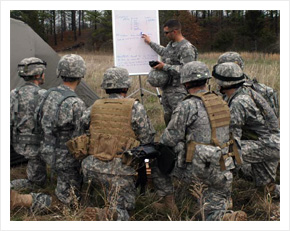 I don’t know about you, but if my weapon went black in a hallway with armed opponents just meters away, I would be clubbing my opponent into submission with said defective weapon!

There doesn’t seem to be much wrong with the scenario, per se. The problem apparently is that the SWAT officers were not employing creative problem solving. I asked the One Shepherd instructor if the officers had any tape, plastic, netting or even office furniture. “Why?” he shot back. Well, to barricade the doors and hallways so as to slow, kill, or capture the gunmen. I explained that tape also offers a quick visual for marking already searched rooms. The light above his head went on.

“Oh. So you don’t necessarily have to shoot the enemy,” he said, thinking out loud.

You need to solve the problem. If that means using your weapon, then so be it. If it means setting fire to part of the structure to either deny its use to the enemy or force them out into prepared engagement areas, then so be it. And yes, as crazy as it sounds, if I can whip up a spider web of 100mph tape and zip up the bad guy as he runs down the hallway, then sure. Why not?

The point is that training scenarios should offer the opportunity to problem solve. And by creating a safe place to fail, we encourage creative problem solving. Failure is good. It’s a critical part of the training methodology in that it offers an opportunity for reflective thinking and the generation of new possible solutions to the problem.

Course it never hurts to know your weapon.