As I mentioned in my last article, ”Area and Local Security: Conceptual framing for Tactical Security Operations”, there are three similar, yet separate forms of TSO; Screen, Guard, and Cover. Each entail a progressively higher level of capability and requirements. These three categories employ a variety of tactics, techniques, and procedures to achieve success. They also entail a progressive level of active and passive resistance to enemy elements. These three forms fall under the category of tactical enabling, which, like its namesake suggests enables or shapes conditions for other types of operations.

A Screen is a mission requiring an element to provide early warning of enemy activity and or movement for a larger force. The Screen enables the larger friendly element to react upon discovery of enemy action. The Screen typically reports enemy activity and maintains visual/audio contact throughout the task. It may at times be tasked to disrupt enemy reconnaissance and infiltration activities through a variety of techniques. It should not, however be expected to disrupt forces more capable than reconnaissance elements due to its limited size and weapons capabilities. Screens can utilize several techniques to accomplish their task. 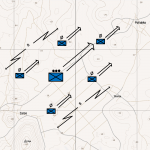 Roving patrols , or moving screens, help cover more ground and enable the screening force to actively seek out enemy reconnaissance elements. The Screen patrol can change its speed of march to force the enemy element to react.Changing the speed at which your screening patrol(s) move can catch your enemy off guard especially if its a larger size or you may force the enemy element to hide and evade your moving patrol. This patrols actively seek contact with the assumption that force will be used to disrupt enemy activity. Screening patrols must be prepared to make “Hard contact” or exchange fires. This does not preclude a moving screen from making “Soft contact” or visual only contact with the enemy once or for continued surveillance. Like any good game however, your opponent gets a vote and many have learned how to bypass moving screening patrols. 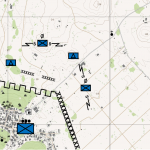 The static or stationary screen, utilizes Listening Posts/Observation Posts (LP/OPs) to passively survey for enemy elements. This technique attempts in targeting enemy elements while they move and enables your elements to stay hidden, hopefully keeping the enemy elements unaware. The benefit to the Static Screen is that enemy elements may be looking for screening patrols but rarely find well placed LP/OP’s. LP/OP’s only require a minimum of two people, which can maximize the amount of friendly elements coverage area with a smaller force. The downsides to the static screen technique is that the enemy can quickly move out of visual contact with the LP/OP and will require another static or moving screen to regain contact, potentially risking a loss in contact with enemy forces.  The traditionally smaller friendly LP/OP position is at risk from being overwhelmed by a larger enemy element. 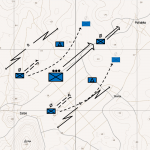 The third technique is that of both Static LP/OP’s and Moving patrols. This combination of active and passive techniques seek to force the enemy to move away from roving patrols and into your static LP/OP’s contact. Once contact is made the moving patrols or a reserve can intercept enemy reconnaissance or infiltration elements while the LP/OP’s can remain hidden to continue their screening task. By having a variety of moving and static elements the enemy is forced to guess when and where you will have eyes and ears. The moving screen may stop and become static for extended periods to disrupt enemy action. These variations in moving and static positions must be coordinated prior too and communicated to all elements to ensure fratricide does not occur while friendly elements move about the battle space.  When the larger parent element is moving, screening forces can continuously move to its front, rear and or flanks along side of the parent element, or remain temporarily static through halts. Additionally screening elements may choose to bound during the screen on the flanks through alternating or successive bounds.

What is the Size of a Screening Force?

Historical examples of screens can show units as large as a division, much like the French 6th Light Armored Division during Opération Daguet which served as the Coalitions principal screening force for Operation Desert Shield in 1991, or as small as a fire team conducting a platoon/company sized operation in the jungles of Vietnam. Screening forces vary in size based on the larger unit that requires the screening. In addition a screening force is noted to have as few as possible numbers to accomplish the picking up and maintaining contact of the enemy (Economy of force).  In the cases where a screen is tasked, having the smallest element possible gives the screening force added mobility to evade, and follow larger enemy elements, while picking up and harassing smaller enemy elements. 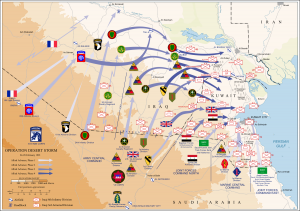 The role of the 6th French Light Armoured Division and the US XVIII Airborne Corps was to protect the theatre left flank and  draw off Iraqi tactical and operational reserves.

It should be noted that the screening force(s) will  be as small as or smaller than and have less combat power than the estimated threat. Without this consideration the screening element could be tasked with something it cannot realistically accomplish and is doomed to defeat. If the force is larger than the anticipated threat then it could be reconsidered as an element capable of cover or guard and should be tasked as such with new commanders intent.

Where is the screen sent in relation to its larger friendly element?

The Screen is tasked and positioned based on the activity of the larger friendly element. The larger friendly element may be moving, or static itself. The larger unit has 360 degrees of potential enemy threat axis to worry about in non linear cases, or a more narrow front in linear cases and may task an element to screen to its front, flanks, or rear. In some linear cases the threat has specific axis’ and some areas may have a higher threat potential than others. The screening techniques will vary depending on the activity of the larger friendly unit and the situation at hand. The screening element needs to be far enough away from the parent element that it can provide accurate early warning, but stay close enough to be within the umbrella of its parent elements indirect fire support.

What if the enemy brings all of his friends?

The downside to a screen is that it only has small, lightly armed elements. If the enemy force is larger than friendly screening elements, the screen will not be able to disrupt the enemy force without risking its own life. It can augment size by conducting and initiating engagements at farther distances but any exposure to a larger element has an increased risk, turning a screening mission into a decisive engagement at worst or an evasion at best, which may result in a defacto loss of situational awareness, leaving your screening force useless. The Screening force has limited combat power, or potentially exhaustible resources to fight with. This may mean the best course of action (C.O.A.) is to report the situation, hide until the larger force moves past and either follow the larger enemy force at a safe distance, or continue screening in your assigned A.O. and letting the larger force go past once reported. Contingency plans should be made ahead of time with the larger unit outlining Rules of Engagement (R.O.E.) and actions to take if your screening element encounters a larger force.

What if we get into “hard” contact and fires are exchanged?

No other question is more relevant than this when firing starts. This is also the most difficult question to answer as each situation may dictate a different yet appropriate response. The critical deciding factor of action is as always the commanders intent and specifically the end state. What a Screen should not accomplish is the holding of ground or the blocking of enemy elements. This is reserved for the guard and or the cover respectively and because of your light and relatively weak task organization, you shouldn’t be expected to hold your ground. In the screen, if you find yourself engaged and the choice between holding ground or destroying the enemy requires you to lose your screening force, then RUN! You may even be able to slip away to get eyes on from another approach without firing back. Your larger element cant see or tell whats going on if your screening force is destroyed. The last caveat is a general rule for all engagements, if you become decisively engaged, meaning you cannot break contact either through your organic means or with help, then you must win the fight or die. Because of the balance between staying alive and reporting and harassing the enemy, units should practice this task often as part of their training cycle. This takes a heavy amount of small, local level leadership that usually occurs within a squad to fire team element on the small unit level and therefore requires low level leadership to not only understand how to screen, and the purpose, but also practice of exercising initiative while away from the main body in accord with the commanders intent.