One of the most crucial parts of any weapon is the sighting system.  Without an ability to align the weapon with the intended target, the deployment of that weapon can be disappointingly fruitless.  Examining the various systems available can help you select the most appropriate one for your application and needs.

Although early thrown or hurled weapons had no mechanical sighting system, there was a system that is still in use today with modern weapons.  Simple hand eye coordination is used to launch a weapon at its intended target.  The downside to this primitive method is the training and practice required to become effective enough.  But once learned, it is a proven reliable system.  There is nothing mechanically to fail or lose, unless the human body itself is damaged.

This method is still applicable to modern firearms.  Holding the fore grip of a rifle with the index finger extended along the bore of the rifle is an expedient alignment method for night time engagements.  Simply establish the four points of contact with the rifle as normal and “point” to your intended target.

Self-defense marksmanship, typically with a pistol, employs this method.  Unless your profession affords you the ability to practice with tens of thousands of rounds a year for many years, most people will default to simply pointing their pistol at the threat and squeezing the trigger, even if they have taken a few pistol classes.  The more “primitive” brain takes over.  No front-sight focus, no ball in a cup, no 3 dots aligned – simply point and shoot.

By nature of the design of firearms, there has always been somewhat of a built in sighting system – the barrel itself.   Notch and post type iron sights added to the barrel allow a greater fidelity of alignment, especially with longer barrels.

Sight radius is an important consideration when using iron sights.  Any perceived offset between the front sight and the rear sight becomes more difficult to predict the closer the two are.  Conversely, a longer sight radius affords the user the ability to detect small deviations in alignment.  This basic principle holds true regardless of the style or shape of the front and rear sights.

There are a few considerations when choosing the style of iron sights.  Fixed vs. folding, rear sight shape and front post width, and even self-illuminating sights.

Fixed sights rarely “break” or fall off and seldom jostled out of alignment.  Folding sights on the other hand, are not typically integral to the structure of the weapon.  They have a greater chance of falling off or shifting relative to the bore due to impacts or thermal expansion and contraction of the various components.  They do however provide a low profile and therefore less chance of snagging on your gear or the environment around you.  This makes them suitable as a backup to a primary optic system.

Rear sight selection basically comes down to a grove or a hole.  Grooved rear sights are lower profile and generally work better in low light.  One downside is that the top surface that the top of the front sight post is to align to, tends to gets indistinctively blurry.  It’s hard to decisively tell where the top of the rear sight is, especially when it’s intended to be blurry in relation to the front sight.  This is due to the difference in what is known as the umbra and penumbra – the primary and secondary shadows that form. 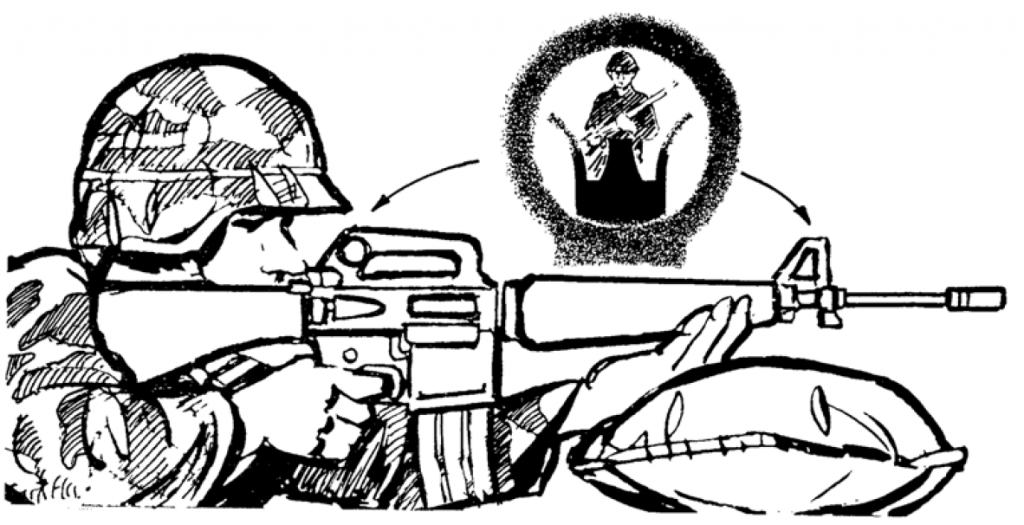 Circular or diamond shaped rear sights, allow the eye to more naturally find center of the intentionally blurry rear aperture.  However, because of the nature of an aperture, it limits the amount of light from the target area that can enter the eye.  These systems often remedy this by including a daytime (smaller) and a nighttime (larger) aperture that is flipped or rotated in exchange for the other.

The front post width is also important.  Too wide and you lose the ability to determine the exact center of the post, and therefore where the round will impact.  Too narrow and it becomes difficult to quickly pick up in a “must shoot right now” situation.  As a general rules of thumb, the longer the expected target, the narrower the front sight post.

Wider than ideal front sight posts can be sighted-in in such a way that the left or right corners of the front post become the impact point at longer ranges.  This method still makes the system accurate at close ranges as the adjustment necessary is of negligible effect.

Optical sights, magnified or not, allow the focal plane of the eye to be on the target rather than the front sight post.  This makes target acquisition and weapon alignment more natural as the eye does not have to rapidly change focal planes.  A reticle or other shapes are used to align the optic, and therefore weapon, with the target.

Non-magnified optics, allow for a natural transition from iron sights.  It should be noted that optics do not necessarily make the shooter more inherently accurate.  Much like the misconception with visible lasers, without proper fundamentals, they just allow the shooter to watch their point of impact shift suddenly off target the instant just before the shot breaks.

With proper fundamentals, non-magnified optics like red dots or rings allow for fast engagement, particularly of targets within 300 meters.  Dot size can become an issue as larger dots may cover the entire target at ranges beyond 200 meters resulting in an ambiguous impact point.  As such these are more typically used for relatively close engagements.  Also, as these are often battery powered, reliability becomes an issue.  Batteries die, lenses crack or fog. 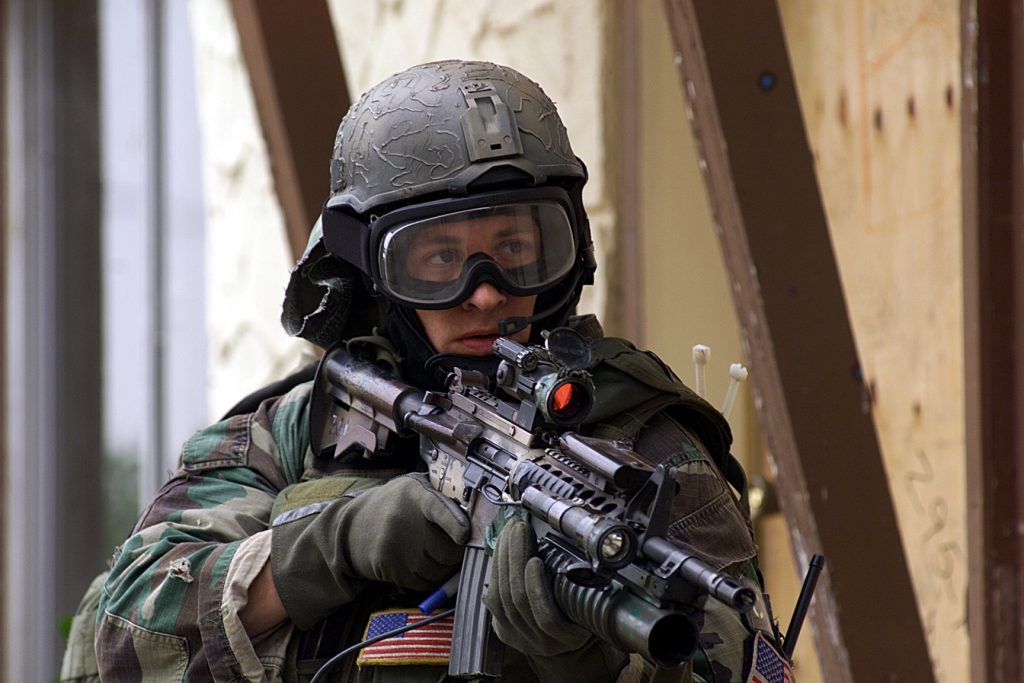 Magnified optics allow for target detection at longer rangers.  Usually 300-400 meters and beyond.  As such, they are typically mounted to weapons capable of effective fire at those ranges.  They can be passive, or have battery powered or other self-illuminating features.  Usually, because of their bulk and relative sensitivity, they are typically associated with special purpose weapons that maximize their benefit.  As such this limits the speed at which they can be employed at shorter ranges.  This can be mitigated by using them in conjunction with offset red-dots or iron sights, but at the cost of weight and bulk.

Electro-Optical sights amplify ambient light and/or convert an invisible band of the electromagnetic spectrum into a visible.  They typically convert the infrared (heat) spectrum.  These systems both gather light from the target using lenses, and focus it to a receiver that amplifies or converts that signal onto a display that is then sent through lenses towards the user’s eye.  They can be magnified or not.

The most common and familiar is night vision.  The familiar green image is the output of an image intensifier.  The human eye is able to distinguish the most variance amongst shades of green, and as such green was chosen as the output.  Night vision systems amplify ambient light as well as detect infrared light.  These systems are either passive or active by means shining an infrared light not visible to the naked eye, towards the target.  The IR light effectively “paints” the target allowing the image intensifier to further enhance the image.

Although there are “auto-gated” features available for use in changing light conditions, these sights are limited to night time use.  Additionally because of their limited service life, expense, and sensitivity, they are often restricted to special purpose weapons and forces.  They are removed for daylight operations.

Thermal sights operate in a similar manner except they amplify and convert heat signatures into a visual representation, typically black and white.  “White hot” or “black hot” settings are available, allowing the temperature gradient to be displayed per the user’s preference.  These systems rely on contrasting heat signatures between a warm target and its cooler background.

Unlike night vision systems though, they allow for rapid target acquisition as warm targets are practically highlighted for the user.  These systems are highly sensitive and extremely cost prohibitive.  There are even systems that combine night vision and thermal imagery.  Be prepared to drop as much as a decent new car on these systems.

Each system has its own advantages and disadvantages.  Each should be carefully weighted to the environment you will be operating in.  Just because elite forces have expensive sighting systems, that doesn’t necessarily mean you will see a benefit if you start using it too.  Weight your needs and desires against factors of cost and reliability and the benefit you perceive.